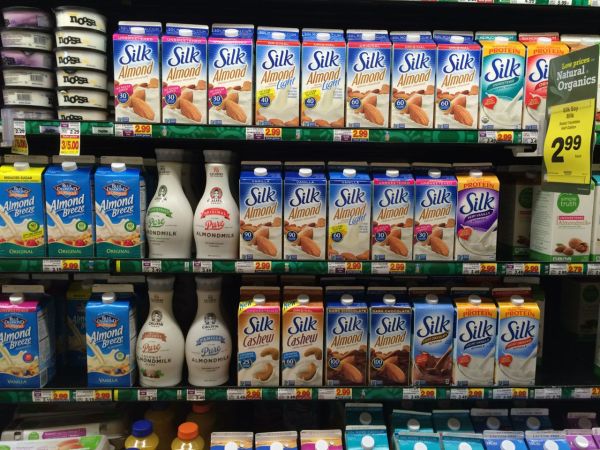 Ok, so I have mixed emotions when it comes to almond milk.  I like it because it is a good source of calcium and has a low acid load.  It is low in calories and a good alternative for people who don’t drink milk.   I don’t like it because it is very low in protein compared to milk, actually contains very few almonds and many commercial almond milks have lots of additives.  It is a processed food and I generally recommend people avoid processed foods so it seems I may be contradicting myself here.

While almonds are a good source of calcium, there are not enough actual almonds in almond milk to make a significant calcium contribution so the majority of calcium in almond milk is added and not naturally occurring like with milk or kefir.  Even when almond milk is consumed as part of a food and mixed with other nutrients, like in a smoothie or to make oatmeal or baked goods, it still seems to me to be very much like taking a calcium supplement.  So my recommendation with almond milk is the same as with calcium supplements – avoid getting more calcium than you need in the almond milk or supplement form.  Therefore I would use almond milk conservatively and especially if you buy the really high calcium ones with 450 mg. calcium per 8 ounce serving.  Don’t over consume almond milk in an effort to get more calcium than you need, as more is not better when it comes to supplemental forms of calcium.  I have come across people consuming 3 to 4 glasses of almond milk per day in an effort to get “lots of calcium”.  Using a 450 mg. calcium per 8 ounce serving value, four 8 ounce glasses of almond milk would equal 1800 mg. calcium just from almond milk which exceeds the daily requirement (1000 to 1200 mg. depending on your age & sex) significantly.

When I use almond milk I buy one that does not contain carrageenan.  I also only buy unsweetened, plain almond milk.  The flavored almond milks usually contain a lot of sugar so avoid those.

I do include some almond milk in my Eating Plan, often in the smoothies and to make oatmeal.  If you are following my Eating Plan you don’t need to be concerned about getting too much almond milk as I have calculated the daily calcium intake so that you get the right amounts of calcium every day. You can substitute kefir or milk (skim or low fat) for almond milk in my Smoothie recipes if you prefer.  I tend to use almond milk when I make oatmeal unless I know that day I will get plenty of calcium without it.

So based on what I know I think it is fine to use almond milk in moderate amounts and within your daily calcium requirement.  I will keep an eye out for any research or information that might change my mind about almond milk and keep you up to date.