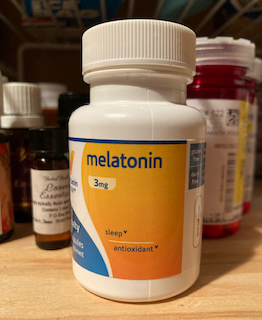 I’m getting more and more questions about melatonin and bones. I think that’s because it is a commonly used supplement for sleep and the data related to fractures is confusing. Melatonin plays a role in regulating the body’s wake-sleep cycle and has been recommended as possibly helping people whose natural sleep cycles are disrupted. Melatonin has also been proposed for a variety of other maladies.

Research has found that melatonin may slightly increase bone density, BUT it also may make bone less flexible and cause bone to be more likely to fracture. One study done on adults with an average age of 65 found that those on melatonin were 90% more likely to suffer a fracture than the people in a control group not taking melatonin. When the researchers adjusted for possible factors that could have affected the results melatonin users were still 44% more likely to have a fracture.

While melatonin may increase bone density, it possibly does so by inhibiting bone resorption, rather than increasing bone formation, which is not something you would want while trying to heal a fracture. Bone resorption is the desired process of breaking down old bone and allowing for new bone formation. If you want to optimize fracture healing then use of melatonin after a fracture may not be a good idea as it could impair healing.

The effect of melatonin on bones seems to be related to long term use and not occasional use. So, as far as your bones go, it is probably best to limit or avoid use of melatonin.