Confused in the Yogurt Aisle?? 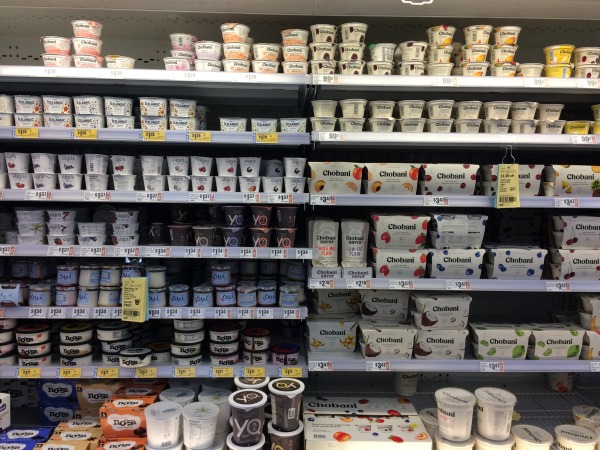 You’ve probably noticed the plethora of yogurt choices at your grocery store and may be curious as to how they all compare. It’s great to have so many options but it can be overwhelming. Here is a rundown on some of the yogurts to help you navigate and decide:

Traditional is the original yogurt, the first yogurt most of us were introduced to many years ago. It is not strained, therefore thinner than Greek yogurt or Icelandic yogurt. Generally traditional yogurt will have more calcium than Greek or Icelandic. It is available as skim, low fat and full fat yogurt. When Cook’s Illustrated sampled some yogurts they identified “Brown Cow Cream Top Plain Yogurt” as their favorite traditional American yogurt (July/August 2019 issue).

Greek yogurt is strained, therefore thicker, and contains less lactose and calcium, but is still an excellent source of calcium. Greek yogurt is higher in protein than traditional yogurt. It is also available as skim, low fat and full fat. Cook’s Illustrated identifies their favorite Greek yogurt as being “FAGE Total Classic Greek Yogurt”.

Icelandic yogurt (skyr) is the thickest yogurt and usually the highest in protein and lowest in lactose. It takes 4 cups of milk to make 1 cup of Icelandic yogurt. It is available as skim, low fat, full fat and even “triple cream”. Many people find it to be the tartest of the yogurts. Cook’s Illustrated rated “Green Mountain Creamery Skyr Icelandic Style Yogurt” the winner in the Icelandic category.

Australian (Aussie) yogurt is unstrained and usually made from whole milk. Cook’s top pick for Australian yogurts was “Wallaby Organic Aussie Smooth Plain Whole Milk Yogurt”. Some of the tasters noted a “slight sweetness” to this yogurt.

Bulgarian yogurt tends to be thinner and very tart. It is especially good combined with savory foods. Top pick by Cook’s is “White Mountain Foods Whole Milk Bulgarian Yogurt”. This will be a thinner yogurt.

The techniques for making yogurt thick can vary. Originally they were cooked to thicken. Now some manufacturers make them thicker by either using evaporated milk or by adding nonfat milk powder, which also gives them more protein. Greek and Icelandic yogurts are generally strained to remove the whey, which concentrates the protein further.

If you don’t tolerate or don't wish to consume milk products there are lots of nondairy alternative yogurts. They are not naturally high sources of calcium, like the dairy yogurts, but often have added calcium. They may or may not contain probiotics so check the labels.

To assure a good amount of probiotics look for the “Live and Active Cultures” seal on the label. You can also check out the National Yogurt Associations website AboutYogurt.com for a list of companies that are approved to use the seal. Fermentation times vary widely but usually the longer the fermentation time the tangier the yogurt.

It’s best to buy plain yogurt and add your own fruit and a dab of honey or maple syrup if you want it sweeter. If you do buy flavored yogurts choose the ones with the least added sugar. Don’t be surprised if your Aussie, Bulgarian, Icelandic or Greek yogurt is made in the United States and not in the country the name might lead you to believe it is from.

Try them all and see which ones you like best.