Chia Seeds can add to your daily calcium intake 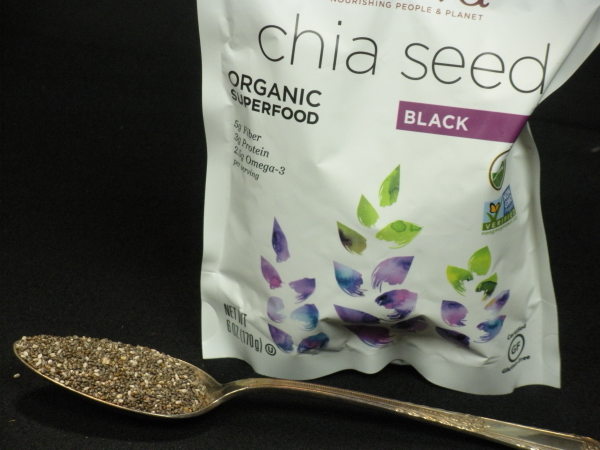 Two Tablespoons of chia seeds contain 138 calories, 9 grams healthy fat, 10 grams fiber, 5 grams protein and 179 milligrams calcium as well as being rich in antioxidants.  Chia seeds are derived from a plant in the mint family, have a mild, neutral flavor and can be eaten whole or ground.   Chia seeds are available in white or black.  There is no significant difference in the taste or nutritional value of the two colors.  When chia seeds are mixed with a liquid they swell and form a gel, which makes them a good substitute for eggs in baked goods and for pectin in jam.  One tablespoon ground chia mixed with 3 Tablespoons water equals one large egg in cooking.   Other good uses for chai seeds include sprinkling on cereal, salads and yogurt, including in breading and sauces, blending into smoothies or adding to muffins, waffles, pancakes or breads.  They also make a good binder in veggie patties or used to thicken soups.

You can also purchase sprouted chia powder, which can be used in gluten free cooking or sprinkled on foods.  However as of June 9, 2014, 21 people in 12 states have been sickened and two hospitalized after eating sprouted chia powder contaminated with Salmonella bacteria. In Canada, 44 have become ill and five hospitalized.  This food safety outbreak has prompted a voluntary recall of Organic Sprouted Chia Powder products produced by Health Matters America, Inc., of Cheektowaga, New York, and by Navitas Naturals of Novato, California. Their products were distributed to grocery and health food stores nationwide in both the U.S. and Canada. People should, of course, avoid eating any of the recalled products.  You can read more about the recall at http://www.cdc.gov/salmonella/newport-05-14/index.html

So far no good research has proven any of the “superfood” claims for chai seeds and more research is needed before any definitive claims can be made.   But that doesn’t mean they aren’t a healthy and nutritious addition to your diet as well as a good source of calcium– just don’t expect miraculous weight loss from them.  Also don’t forget they have 69 calories per tablespoon which can add up if you need to limit your calories for weight control.